IN BUILDINGS and the UNITED STATES 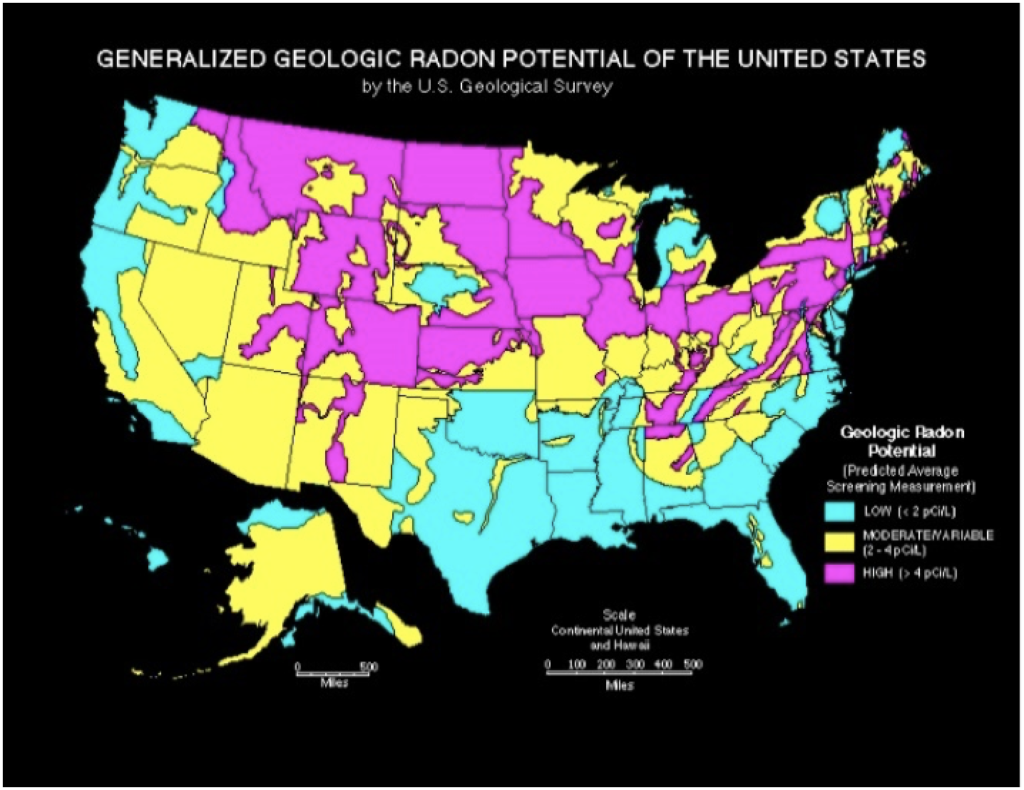 Radon is a radioactive element that is considered the second biggest cause of lung cancer. Because it is a natural product of soil the buildings in the granite prevalent soil areas tend to have Radon gas permeating the building through the foundation or basement or slab.

Radon 222, which is released with the natural gas in fracked rock, has a half-life of just 3.8 days. This may not seem like much but consider where the fracking is taking place and the location of buildings in relation to the fracking receiving piped in natural gas. The Marcellus Shale is a rock formation currently being heavily fracked. This formation geographically located in upstate New York south through Pennsylvania to West Virginia and west to parts of Ohio. The natural gas is being piped into buildings throughout the east. Unfortunately, these fracking operations to obtain natural gas is in relatively close proximity to the buildings receiving it and as such there is no lag time for the Radon to decay. In addition to the soil in this area naturally off-gassing Radon it is now also entering buildings through the natural gas pipelines. 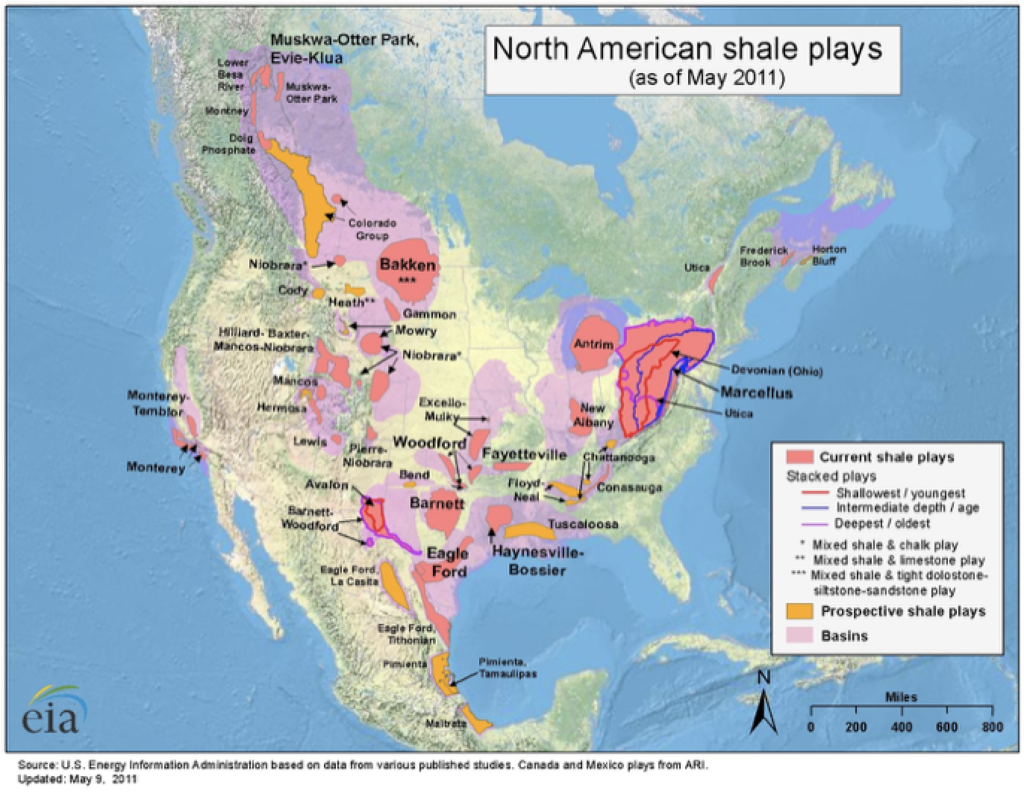 It should be noted that the decay of Radon does not mean it is gone. The decay results in additional radionuclides released in the decaying process, one of which is Polonium-210 with a half-life of 138.8 days. A speck smaller than a particle of pepper of Polonium-210 is highly lethal.

Fracked natural gas with its ride-along Radon is entering buildings throughout the United States and recognizing its potential harmful consequences is essential to the health of the population.

State and Federal Regulations Regarding Radon in Buildings

There are many different state and federal regulations regarding Radon in buildings. According to the US EPA, nearly 1 in 3 homes checked in seven states and on three Indian lands had screening levels over 4 pCi/L, the EPA’s recommended action level for Radon exposure.

A family whose home has Radon levels of 4 pCi/L is exposed to approximately 35 times as much radiation as the Nuclear Regulatory Commission would allow if that family was standing next to the fence of a radioactive waste site. (25 mrem limit, 800 mrem exposure)

An elementary school student that spends 8 hours per day and 180 days per year in a classroom with 4 pCi/L of Radon will receive nearly 10 times as much radiation as the Nuclear Regulatory Commission allows at the edge of a nuclear power plant. (25 mrem limit, 200 mrem exposure)

Some scientific studies of Radon exposure indicate that children may be more sensitive to Radon. This may be due to their higher respiration rate and their rapidly dividing cells, which may be more vulnerable to radiation damage.

The U.S. Environmental Protection Agency (US EPA) and the Surgeon General’s Office have estimated that as many as 20,000 lung cancer deaths are caused each year by Radon. Radon is the second leading cause of lung cancer. Radon-induced lung cancer costs the United States over $2 billion dollars per year in both direct and indirect health care costs. (Based on National Cancer Institute statistics of 14,400 annual Radon lung cancer deaths – Oster, Colditz & Kelley, 1984)

Whether in a single-family residence, an apartment or condominium with multiple units, an office building, a sports stadium, a hospital, government building or school the people inside are vulnerable to Radon exposure. This is particularly true for the areas of the United States that have a high granite component in the soil.

With the fracking process and the transport of piped in natural gas for heating and cooking there is an increased level of Radon in buildings. John Hopkins Bloomberg School of Public Health researchers found that 42% of their readings in Pennsylvania, home of the Marcellus Shale, surpassed the EPA maximum allowed guideline of 4 pCi/l.

Testing is the only way to determine a buildings Radon level. It is colorless and odorless. There are no immediate symptoms that will alert you to the presence of Radon. It typically takes years of exposure before any problems surface. The US EPA, Surgeon General, American Lung Association, American Medical Association, and National Safety Council all recommend testing

With US Nuclear Corp’s state-of-the-art instruments, the portable Radon Monitor and the RANDFAN-SX, detector and mitigation switch, expediency in detection and mitigation takes place.

US Nuclear Corp has developed two unique Radon detectors. One is a portable that will produce a reading in as little as 10 minutes. Typical Radon detection involves placement of a charcoal cartridge in a basement or along the perimeter of at the foundation of a building. This is left in place for a week or more and then sent to lab for testing and analysis. US Nuclear Corp’s portable Radon Monitor avoids delay and expensive lab costs, making it the perfect tool for Radon inspectors.

US Nuclear Corp’s RANDFAN-SX is both a Radon detection instrument and a mitigation switch. Installed singly or in tandem with a building HVAC system the RANDFAN-SX will activate mitigation devices such as fans or vents upon detecting the preset alarm rate. This avoids the use of fans 24/7 saving both maintenance of equipment and energy demand.