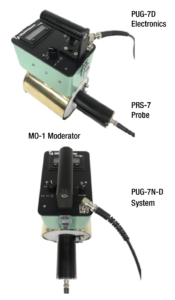 The PUG-7N-D is a complete fast-slow neutron monitor system. It includes the PUG-7D, a five-decade survey meter with an attached detection system: the MO-1 Moderator, and the PNS-20 Probe. The PUG-7N-D System, or “Neutron PUG” detects fast or slow neutrons by means of a thermal neutron scintillation detector and a moderator. When the detector (PNS-20) or (PNS-20H) is external to the moderator, thermal neutrons are detected and measured by means of counts produced in the scintillator as read on the meter of the PUG-7D instrument.